The origin of the Ironman

The Ironman is the most difficult and demanding test of the triatlón. It began in 1978 when 12 triatletas (they informed 15) completed the tour with three tests that compose this challenge; swimming, cycling and career. The victor of the tour was Gordon Haller, a taxita who completed the test in 11 hours 46 minutes.

For every athlete every test is different and more or less hard. Some of them are late more in someone of the disciplines completes that different. What is established they are the distances in kilometres for every test, being; 3,86 km from swimming, 180 km from cycling and 42,2 km from career afoot or what is known as marathon. The career in total has a time limit of 17 hours. In order that we do an idea to ourselves, the average time is 12 to 14 hours and is realized quite in the alone day. The record current time is of 7:13:33 realized in the Ironman North American Championship for Patrik Lange.

Nowadays also it is possible to realize the ” way ironman ” known as Ironman 70.3, instituted by the Word Triathlon Corporation in 2005. It consists of 1900 m of swimming, 90 km from cycling and 21 km from career. 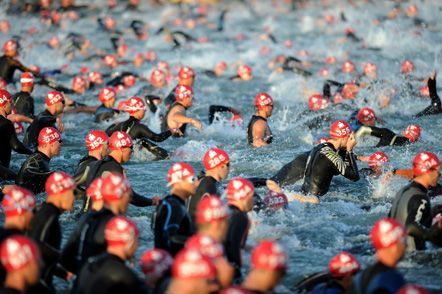 The ironman needs many dedication and hard training since the triatletas are confronted not only to a physical but mental challenge. The normal thing is that the triatletas train for months and cross big distances of three activities (swimming, cycling and career) every week for 1 or 2 years.

For all those interested parties, the tests take place in different places of the world like Australia, Canada, The United States, Spain, France … being the championship of the World in Hawaii.

Newer What is the Swimrun?
Back to list
Older The importance of being hydrated in the physical activity